Is Castor Oil The Secret To Hair Growth? 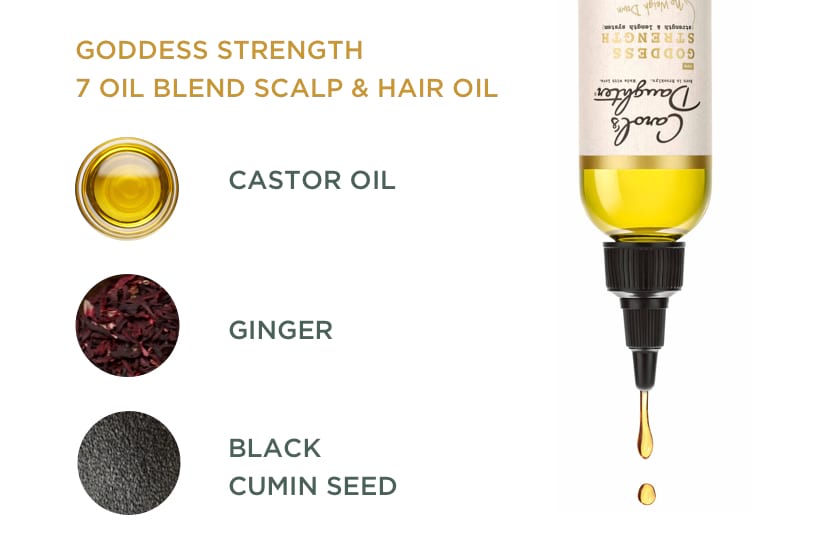 Hair oils can completely change your hair and natural hair care routine. Whether you’re looking to lock in moisture, nourish your scalp or even promote hair growth, there’s an oil for every hair care concern. One of our favorite oils for supporting long locks is none other than castor oil.
As far as oils go, castor oil is pretty impressive. Along with supporting long length, it also nourishes and moisturizes your hair and scalp. If that’s not convincing enough, it also adds shine, clarifies your scalp, and helps smooth hair for styling. The multipurpose oil is a game-changer and well worth the hype.

If you’re interested in using castor oil in your routine, there are a few things you should know like, there’s more than one. Don’t worry—we have all the tips and tricks for using this nourishing oil. Read on for everything you need to know about choosing and using the best castor oil and, of course, which Carol’s Daughter products are full of this miracle ingredient.

WHAT IS CASTOR OIL?

Castor oil is a vegetable oil that’s pressed from castor beans. It’s rich in fatty acids that help to restore proteins and other nutrients into hair. It has significant levels of ricinoleic acid, which is a natural humectant. This means it helps hair and skin retain moisture by preventing water loss. It’s one of the reasons why curly hair, in particular, takes so well to castor oil.

Castor oil is usually clear, but there are types of castor oil that can be dark brown—more on that later. It’s also a very thick oil, so it can be heavier or fine hair. Castor oil for hair has a lengthy shelf-life, so not only does a little go a long way, but it also lasts for a long time.

WHAT ARE THE DIFFERENT TYPES OF CASTOR OIL?

Now that you know what castor oil is, let's get into the types of castor oil for hair and how they differ. Pure castor oil, as we mentioned before, is usually clear. Jamaican Black Castor Oil, another form of the popular oil, is usually darker. The darkness of the Jamaican Black Castor Oil is a result of the creation process, which involves roasting the castor bean. The ash from this process leaves the oil a dark brown color and lends its unique scent.

Aside from the color difference, black castor oil has a higher pH level, which is more alkaline than the other version. The benefit of this is that it tends to be more clarifying and may help open the cuticle. This is a significant benefit if you have low porosity hair that has trouble letting water and moisture in.

So how do you know what type is right for you? It’s a matter of preference. The best castor oil is the one you like most. The formulation process of black castor oil is believed to create an oil with more benefits. However, either oil is an excellent addition to your natural hair care routine.

Let’s get to the bottom of whether castor oil for hair can stimulate your strands and cause growth. The ricinoleic acid in the oil is known to stimulate the receptors responsible for blood vessel dilation. When this happens on your scalp, hair follicles receive a rush of nutrient-rich blood that can help strands flourish. However, there’s no absolute scientific evidence that castor oil is a growth stimulator. What we can say for sure is that it definitely helps rebalance the hair’s moisture levels. Ultimately hair that is well-hydrated, strong, and flexible is more prone to growth.

WHAT ARE THE BENEFITS OF CASTOR OIL?

Castor oil is, in many ways, an easy remedy for a number of hair and skin woes. Here are some of the ways it helps improve the health of hair.

1. It moisturizes. As mentioned, castor oil is a fantastic moisturizer. It’s ideal for both retaining and sealing in nourishment. Castor oil has a heavier consistency than other oils, making it a good solution for sealing hydration into both dry hair and skin. Use the Hair Milk Refresher Spray as a curl reviver and rehydrator in between washes or whenever you feel your hair getting dry.

2. Clarifies the cuticle. The darker, ash-infused version of castor oil works well as a pre-shampoo treatment. This can help open up the cuticle before deep cleaning any product buildup away with a sulfate-free shampoo.

3. Smarter styling. Because castor oil is so good at making weak hair stronger, it’s a useful ingredient to have when styling more delicate pieces of hair like your edges. When styling your edges, reach for the Black Vanilla Edge Control Smoother, which has castor oil in it for safer slicking. Similarly, if you heat style at all, use the Pracaxi Nectar Straight Blow Dry Cream for both its heat-protecting benefits and the castor oil, which keeps hair hydrated while styling.

4. Makes hair more pliable. After only a few styling sessions with the castor oil-enhanced Black Vanilla Moisture and Shine Hair Smoothie, you’ll likely notice that any dryness and brittleness is gone. It makes strands more flexible and less likely to snap off and break.

5. Enhances shine. Much like other oils, castor oil for hair adds a healthy shine to dry and dull hair. It doesn’t soak into hair as some oils do, so you’ll see its glossing benefits even if you only apply a small amount.

HOW OFTEN SHOULD YOU USE CASTOR OIL?

Castor oil can be a great addition to your curly hair routine, but you want to be sure not to overdo it. Castor oil on its own is a thick and heavy oil so, you may want to test it on your scalp and hair first before working it into your routine. While we want the benefits of this multipurpose oil, we don't want to weigh down our curls or overload the scalp with oils. Start with a small amount one to two times a week in the desired area. Better yet, use products where it is the main ingredient for just as many benefits, for example, a castor oil shampoo.

HOW TO USE CASTOR OIL IN YOUR HAIR

If you’re new to using oil on your strands, there are a number of ways to use castor oil for hair.

1. Smooth frizzy ends. How you apply castor oil should be based on your hair texture. Because castor oil is on the heavier side, wavy curls from 3A to 3C should focus the application away from the roots. (While amazing, castor oil can really weigh curls down, making them limp and greasy looking.) Use your fingers to work the oil into the bottom two to three inches of hair as your last styling step. If you need all over moisture minus the weight, the Cactus Rose Water Volume Spray is perfect for you. Even though it has castor oil in it, it moisturizes without compromising on volume.

2. Deep treat. You can also use a castor oil-infused hair mask as a repairing treatment. If your hair is really dry or on the thicker and coarser side, apply once a week either as a pre-shampoo or after shampooing treatment. Finer and wavier textures should only be treated once a month. To help the nutrients and moisturizing properties sink in even deeper, apply heat with either a hair steamer, a heated conditioning cap, or by covering your hair with a regular shower cap and hanging out in a steamy bathroom.

3. Try a massage. If added weight isn’t a concern for your texture, treat your scalp to a good castor oil rubdown. The combination of scalp stimulation from massaging and the indirect effects of the ricinoleic acid may help to get stunted strands or broken edges growing—and back to good health.

4. Prep for detangling. Because castor oil helps coat hair so well, it’s a wonderful remedy for detangling. What’s even better is incorporating a conditioner that already has castor oil in it. After shampooing, work the Goddess Strength Fortifying Conditioner with Castor Oil through your hair with your hands from root to tip. Once hair is fully covered in this castor oil conditioner, use a wide-tooth comb to work through any knots and tangles gently. Be sure to comb from the ends upward to avoid too much tugging and potential breakage. A leave-in castor oil cream is the perfect way to end your wash day. We suggest Goddess Strength Divine Strength Leave In With Castor Oil.

ARE THERE ANY SIDE EFFECTS OR CONCERNS WITH CASTOR OIL?

While there are several perks that come with regular castor oil application, know that the best castor oil isn’t necessarily a pure one. Using the oil by itself can be hit or miss based on your hair texture. A safer option, particularly if you’re just starting out with it, is to use a product infused with castor oil. The Goddess Strength 7 Oil Blend Scalp & Hair Oil with Castor Oil is a blend of oils, so you’re not only getting the benefits from the castor, but also the additional moisturizing properties of coconut and jojoba seed oils. We know that that castor oil is on the heavier side, so if you’re using it regularly, be sure to do monthly washes with Wash Day Delight Micellar Shampoo to help cut back on any buildup.

Still curious about the benefits of different oils? Here’s Your Guide To Hair Oils For Natural and Curly Hair.